Colts At A Canter 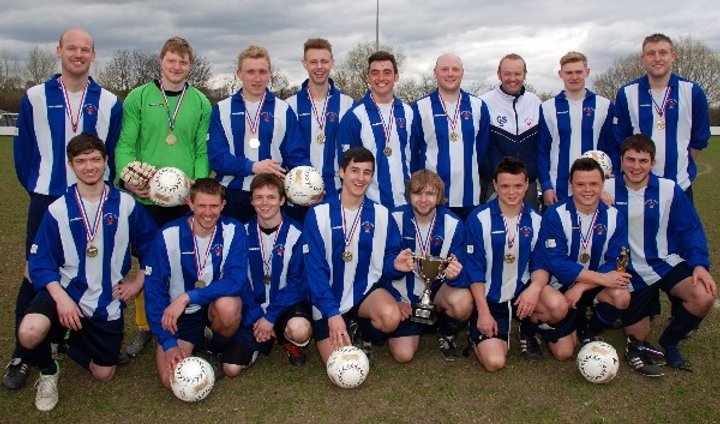 A goal in each-half from Andy Makin and not to be outdone by his twin brother Chris, who also got on the scoring act, as Crofton Colts celebrated a 3-0 success over Wrenthorpe Rangers to lift the Division One League Cup.

The gulf between the two sides was evident as high-fliers Crofton Colts easily overcame a battling Wrenthorpe Rangers outfit at Nostell MW in front of a large crowd.

It was Wrenthorpe who created the first clear-cut chance in the 4th minute when a free-kick by Dan Hilditch saw Graeme Hemingway power a header narrowly wide. However, five minutes later, it was Crofton who drew first blood when a break on the left saw striker Richard Collier beat two players before drilling a low pass across the face of the goal which was easily converted at the far post by Andy Makin for an early 1-0 lead.

In the 10th minute, Crofton skipper Matthew Booth dipping effort was punched out by Wrenthorpe keeper Andrew Daisey only in the path of Lee Dooler whose first time goal-bound shot forced a desperate goal line clearance by Adam Rushton.

The impressive midfielder Jimmy Jagger from Crofton and the work ethic of Wrenthorpe skipper Graeme Hemingway were becoming prominent figures in the middle of the park whilst the direct style of Wrenthorpe frontmen Leshsek Urzykowski and Dan Hilditch found the Crofton defensive duo of Mark Holt and Matthew Dawson in uncompromising form as the game began to take shape.

Jagger went close while at the other end Hilditch flashed a corner across the face of the Crofton goal mouth with a vital touch missing as the game opened up. Hilditch was soon denied by a an excellent blocked challenge of Booth before the danger was cleared.

At the other end, Richard Collier was denied by the Wrenthorpe keeper Daisey who saved bravely at his feet.

A mistake in the Wrenthorpe defence presented Crofton a gift goal as they doubled their tally - the Wrenthorpe keepers pass to his defender was intercepted and saw Andy Makin roll the chance home for his brace in the 48th minute.

Minutes later, the game was over as Crofton surged into a 3-0 lead when Jagger and Rushton combined to find Chris Makin who found target with a low shot.