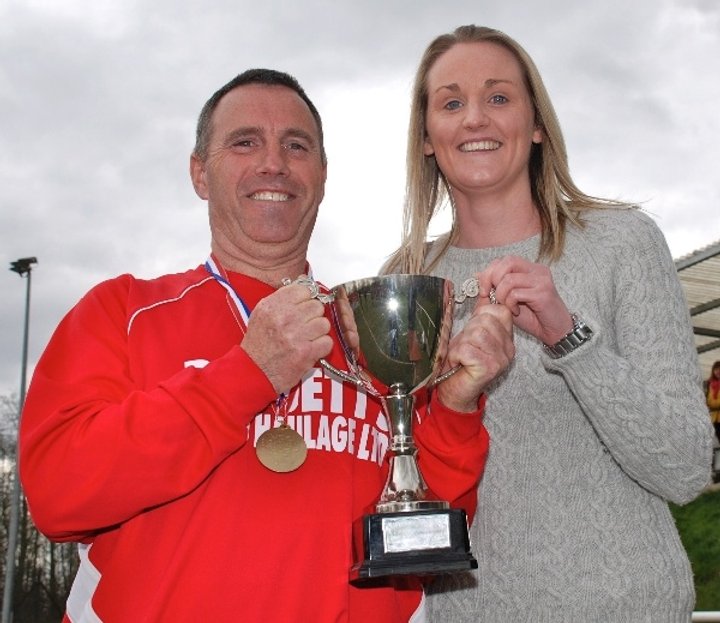 This final was played in front of a big local crowd with West Riding County FA Chief Executive Officer, Hannah Simpson as Guest of Honour for the morning's final.

Crown Scissett made the early in-roads with the lively Chris Trow forcing the King George Reserves keeper Andrew Hirst into a finger-tip save before hitting the side netting with a good chance following a series of corners.

In a counter-attack, George midfielder David LY broke wide only to be brought down. Teenage full-back Jamie Ord stepped up to drill an in-swinging free-kick from the left into the far top corner beyond the reach of the keeper Elliott Hirst for a 1-0 lead with nine minutes on the clock.

The Scissett outfit retaliated with midfielder Chris Trow more prominent in their attacks before breaking down the George resistance which led to the deserved equaliser in the 34th minute. Trow's surging run was halted and saw skipper Nathan Dixon deliver a teasing free-kick from the left which saw an excellent headed goal by Oliver Cosgrove into the bottom corner beyond the diving reach of the keeper to haul his side level.

Both Trow and Stuart Bray were denied goal scoring opportunities by the timely interventions of King George's father and son defensive prowess of Barry and Michael Dixon before a Dixon free-king was headed narrowly wide by Damian Taylor as Crown Scissett threatened to steal the show.

However, against the run of play, it was King George who stole the lead three minutes from half-time. A long punt by Jamie Ord out of defence was headed on by Michael Liversidge and the lurking presence of striker Colin Lovell forced an indecision on the edge of the danger-zone and saw the latter pounce to steer the ball on target to the keepers right to make it 2-1.

Crown Scissett made a bright start on the turn but it was King George who nudged into a 3-1 lead in the 56th minute when a low driven free-kick by Jamie Ord bounced in front of the keeper and skimmed past him agonisingly into the bottom corner and much to the jubilation of the vociferous crowd.

The Scissett side responded and forced their opponents to defend in numbers for a sustained period. Trow hit the George crossbar from a corner and in an isolated break at the other end, defender Danny Briggs came to his sides rescue with a recovery challenge to deny the surging run of David LY.

The purple patch paid dividends with Scissett reducing the deficit with a goal in the 69th minute - the tiring rearguard of King George failed to cut out a Tony Stirling into the danger-zone, and the lively Chris Trow applied the finishing touch in clinical fashion to make it 3-2.