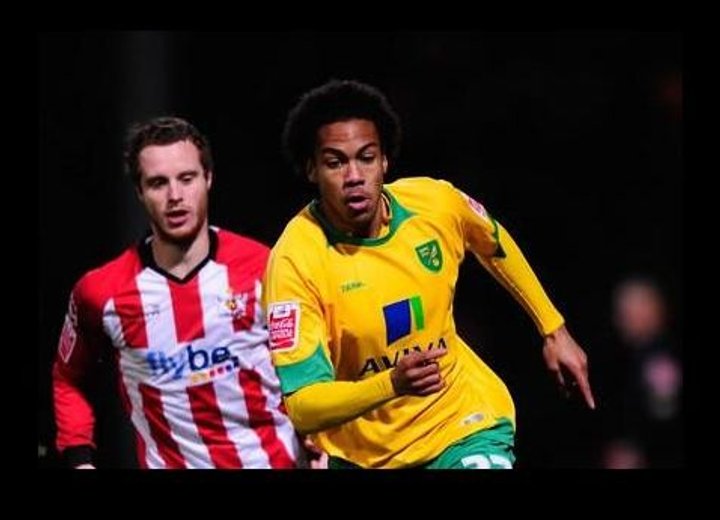 Oli Johnson wouldn’t ordinarily be popular in West Yorkshire after helping Norwich City beat Leeds United to the League One title last season. However, the likeable former Shepherds Arms striker is keeping his feet firmly on the ground after a meteoric rise from pub football to the heady heights of the Championship. In fact, ‘meteoric’ probably doesn’t do justice to the ascension from our very own Shepherds Arms to what some quarters refer to as ‘the third best league in Europe’, behind only the Premiership and Spain’s La Liga. We hooked up with Oli to see how he is coping with life in the big-time.

“THE BIGGEST INFLUENCES ON MY CAREER HAVE BEEN MY DAD, TONY, AND STOCKPORT YOUTH DEVELOPMENT MANAGER, ALAN LORD.” - Oli Johnson 8/9/10

Oli has been playing football as far back as he can remember, but his first small steps on the path to becoming a pro’ were taken as a fresh-faced 7-year-old at Ossett Town’s Academy where his father Tony, was coaching the Under-8s team. Oli is quick to pay tribute to his dad who has been a driving force behind the young striker’s career, “My dad has had a huge influence on my game, and his support has helped me get to where I am today.”

Another huge influence on Oli’s career is Stockport County’s Alan Lord, who helped the striker smooth out the rough edges of his game and secure a career-enhancing move to then-League One side, Norwich City. In only his second appearance, Oli found the net, immediately ingratiating himself to the Canaries faithful. Later in the season, against Southend, Oli completed a dream start by coming off the bench with his team trailing one-nil, equalising and then bagging an injury-time winner. Norwich won the title that year with the Wakefield man appearing 17 times and scoring four, earning his first professional medal at the tender age of 21. Not bad going for a lad playing Sunday League football only two and a half years ago.

Oli remains grounded though, and is still eager to engage in the banter that has made him popular with his peers and cemented his reputation as one of football’s genuinely nice people. When I (somewhat mischievously) asked if he had any plans to follow-up his huge eighties pop hit, ‘Americanos’, he was quick to laugh; “No plans just yet but I won’t rule it out – maybe when I retire I’ll release something - not Diamond Lights though!”

It is refreshing to hear that despite all his successes, Oli still fosters fond memories of the wet and windy Sunday mornings that he shared with his pals at Shepherds Arms FC; “I loved the banter in the changing rooms, the lads were great to be around – I mean, that’s why you play isn’t it – for the banter?”
With all the talk of pros being out of touch with the real world and forgetting their roots, it is reassuring to hear those wise words from a player who could be forgiven for losing a little perspective as his star continues to rise. No such indulgence for Mr. Johnson though, as he modestly refers to the difference in standard between the Championship and our own Sunday League; “Er... It’s a little bit different,” he says, resisting the temptation to expand further!

Joking aside, Oli has adapted quickly to the pressures of the modern game; “I expected it to be difficult to make the step-up from non-league, but it hasn’t been as tough as I first thought. Don’t get me wrong, it has been extremely hard work, but you don’t realise what you can do until you get the opportunity.”
Those opportunities have been limited this season, with Grant Holt and Chris Martin forging a formidable striking partnership for the Canaries, but Oli is patient and optimistic about the future; “It’s just great to do something you love every day.”

In fact, Oli is so upbeat that even when he does have cause for complaint, he struggles to work up even a pinch of disgruntlement in relation to FIFA's stifling of goal celebrations; "If I could change one rule in football, it would have to be the ridiculous 'booking for celebrating a goal' rule. It's crazy how you can get booked just for taking your shirt off!". Crazy indeed, particularly when you take into account that it's fine to remove your shirt and exchange it after the game.
A debate that will rumble on for years to come, no doubt.

Moaning aside, with over 60 professional appearances and 11 goals to his name already, Oli is heavy on experience for a 22 year old and when the opportunity comes along he won’t be fazed. Make no mistake, Oli Johnson is here to stay and that can only be a positive thing for the game. With his easy-going nature and professional attitude, this Wakefield lad will go far. I am sure that everyone involved in the Wakefield & District Sunday League will join me in wishing this very personable pro’ all the best for the future.

Quiet Night In or Big Night Out?
BIG NIGHT OUT

What’s on your CD player at the minute?
PAOLO NUTINI

Any good?
A BIT GORY

Oli was talking to Jonathan Scargill

Directions to Pitches  Directions From Your Ground To The Away Ground