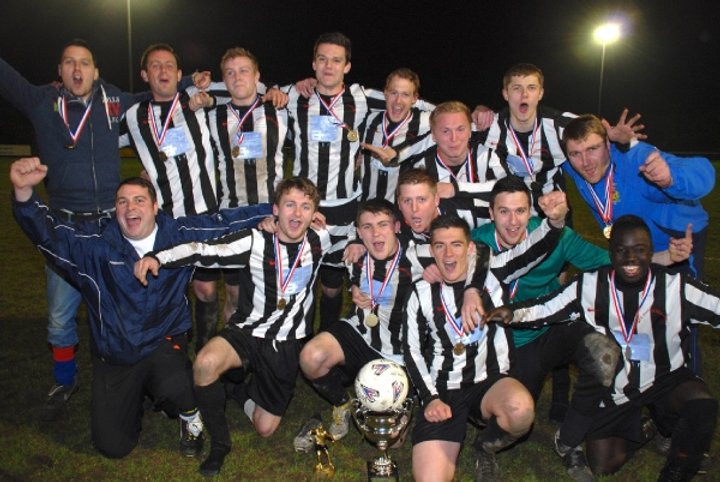 The Premier Division League Cup has a new Champion after a leg wobbling 191 minutes of football was played to decide the winner.

The rearranged final went to extra-time after the initial tie was abandoned on 71 minutes due to a spectacular cloudburst.

We are checking our history books to see if this is a Wakefield Sunday League record but both teams certainly deserve credit for giving us a feast of hotly contested football.

A last-gasp winner in the second period of extra-time from midfielder Brandon Kayne saw Shepherds Arms come from behind to overcome stylist ten men Kinsley Hotel to lift the Premier Division League Cup.

The contrasting playing styles was evident from the outset with Kinsley's inventive and flowing play against the directing running and counter-attacing play of the Shepherds Arms producing a lot of drama-packed action.

Shepherds Arms posted an early warning with the striking duo of Jimmy Eyles and Ben Njie forcing Kinsley keeper Thomas Chesteny into noteworthy stops in the opening minutes. At the other end, Kinsley skipper Liam Radford saw his tricky run draw a foul on the edge of the box which saw the resultant free-kick from Neil Towler pushed away form a corner by the diving keeper Dan Payne.

Kinsley Hotel grew in confidence and saw Reece Hicks shoot narrowly wide following an excellent Michael Unwin cross before a flick-on from a Gareth Lloyd pass found Andy Davis who shot on the turn to give his side a well-deserved lead in the 15th minute. Towler almost doubled his side's tally but was denied by the outstretched arm and leg of keeper Payne before Shepherds Arms lost defender Joe Walton who sustained a head-injury in the 20th minute.

Substitute David Ramsey was soon in the thick of action, winning possession before linking up with Njie and paving an opening for speed merchant Jimmy Eyles who found target but the goal was disallowed with the latter adjudged to be narrowly offside.

Drama unfolded on the half hour when a Davis subtle pass put Radford clear only to be brought down by a recovering defender. Following a prolonged stop, the referee consulted his assistant which resulted into a caution for the defender and a free kick for the Kinsley Hotel which was saved by the diving keeper Payne.

The Horbury-based outfit retaliated and saw a surging run from Kayne halted and a quickly taken free kick by Njie released Eyles whose effort was pushed onto the woodwork by keeper Chesteny and saw Oliver Backhouse fail to cash in on the rebound - a golden opportunity missed. However, Kinsley finished the half stronger with Radford, Hicks and Towler all going close - missed chances which was to prove costly.

The second-half proved to be a tight affair for the opening half an hour before chances unfolded at both ends. Kinsley's John Appleton went close with a dipping effort following an excellent inter-play with Radford while at the other end, striker Njie failed to connect at the far post from an excellent Eyles low pass across the face of the goal.

The equaliser came in the 85th minute when midfielder David Precious found Njie on the edge of the box who demonstrated his goal poaching prowess with a clinical low drive on target. The shell shocked Kinsley Hotel has the chance hit the winner in the dying seconds but Radford's goal bound effort was blocked on the line by his own player who could not get out of the way as the game was forced into extra time.

Kinsley Hotel, who were reduced to ten men in the 97th minute with a second bookable offence, but still held the upper hand in terms of the ratio of goal scoring opportunities and saw substitute Joe Howey miss an open goal with the keeper at his mercy following a clever set-up play from Radford before Shepherds Arms defender Tom Brooke blocked a Radford effort on the line.

The second period of extra time saw Kinsley continue to press with good inter-play between Unwin, Davis and Radford ending with the latter forcing keeper Payne into a parried stop before heading the rebound against the crossbar. Substitute David Ramsey produced a match saving last ditch recovery tackle to deny Radford.

Shepherds Arms fought on gamely and always poised a threat on the counter-attack and grabbed a remarkable winner in the dying seconds as the game looked odds on to go into a penalty shoot-out in this stamina sapping encounter. Skipper Luke Thompson found Brandon Kayne wide on the left. The latter cut inside his marker before drilling in a powerful effort on target - a goal worthy of winning any final.