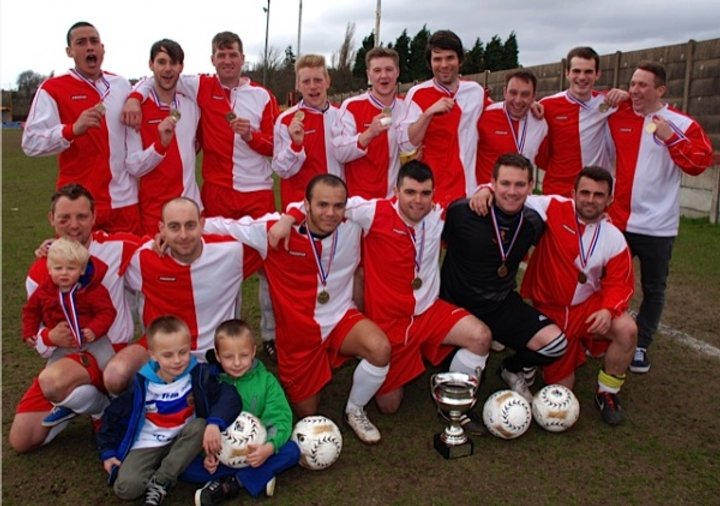 King George FC came from behind to lift the Premier Division League Cup thanks to a close 2-1 success over Hall Green United in blustery playing conditions at Ossett Albion AFC.

The hero of the hour was attacking midfielder Daniel Critchlow who struck home the winner in the 75th minute from a hotly disputed spot-kick to take his goal tally to 40 goals this season.

Both sides adopted a contrasting playing styles against the elements which lacked the sparkles akin to the status of the Premier Division Final spoiled by the windy weather. Hall Green hit the ball early over the top but proved more of a threat with set-pieces expertly delivered by Martin Scarth whilst King George were more patient and controlled possession play to their strengths.

Hall Green keeper Neil May sent a long-punt which bounced in-front of the King George rearguard and saw striker Clifton Firth pounce to send his chance wide in the opening minute. However, the first clear-cut chance fell to King George in the 4th minute when Lee Watson was brought down on the edge of the box and the resultant direct free-kick by fullback Craig Maguire rebounded off the upright before being cleared to safety.

The game saw both sides a threat going forward and found both keepers on show in top form - King George keeper Andrew Liversedge was forced into a full-length s stop from an acrobatic goal-bound effort from Firth while at the other end keeper May was forced into a reactive save from Emley and King George striker Devon McIntosh.

The tit for tat affair saw Neil Samardzija (KG) and Lee Speight (HGU) go close before Tony Morris ended a flowing four man move extending the HGU keeper May into a top drawer save and at the other end free-kick specialist Martin Scarth and a Neil looping effort drew classy save's from KG keeper Liversedge as both sides failed to break the deadlock as first-half drew close.

Hall Green made a strong start on the turn and saw Daniel Empsall foiled in the 46th minute with a save at his feet by the KG keeper before sending a volley narrowly wide following a left-flank corner from Matthew Leadbeater.

The break-through came in the 61st minute when HGU striker Clifton Firth drew a foul on the edge of the box and the resultant set-piece by Scarth was spilled by the KG keeper and saw HG striker Matthew Leadbeater react swiftly to fire the loose ball low on target for a 1-0 lead.

Hall Green's joy was short-lived as King George hauled themselves level within ninety seconds of the jolt of falling behind when a Neil Samardzija right-flank corner was headed on target from close-range by the powerfully built skipper and defender Scott Hartley to make it 1-1.

King George, now in the ascendancy, saw fullback Maguire send a teasing cross across the face of the Hall Green goal with the vital touch evading everyone before Matthew Denton put McIntosh clear only to be foiled by a last-ditch recovery tackle from Scarth (HGU).

The sustained pressure spell told with the winning goal coming fifteen minutes from time when the persistence of Critchlow on the right-flank saw him pave an opening into the danger-zone and a push on his back drew a foul to win a penalty. The player got up to steer the delayed spot-kick to the keeper's left to make it 2-1.

In the 81st minute, McIntosh forced HGU's keeper May into an excellent reactive save as his side drove forward in numbers in a late flurry. HGU had a late penalty appeal turned down with Hartley adjudged to have made a vital contact to the ball before keeper May who had pushed up in the dying seconds headed a Martin Scarth free-kick over as King George celebrated a hard fought cup success.

The "Macron Store, Wakefield" man of the match award was presented to King George skipper Scott Hartley for the equaliser and a towering all-round display.