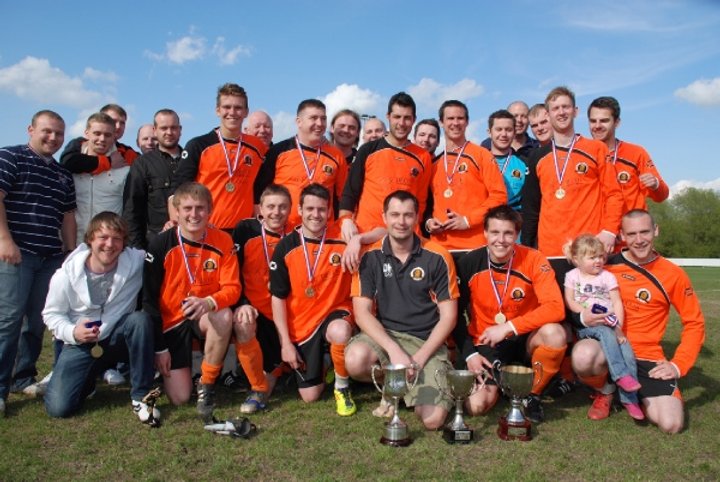 Comrades FC capped their debut season with a hat-trick of trophies, thanks to their unconvincing Supplementary Cup final victory over wayward Peacock FC at Nostell MW.

Goals win games and how true it proved to be as it was Peacock who dominated the match with a much higher ratio of scoring chances in this open final but were to rue missed chances against the cinincal finishing of the cup king's Comrades.

The first open goal scoring chance fell to the Peacock in the 9th minute when stirker Az Dennis put fellow striker Nick Clarke clear only to force keeper Lee Mullighan off his line to foil a golden opportunity. The threat increased as both Clarke and Craig Donnelly saw their goal bound efforts blocked minutes later.

At the other end, Comrades midfielder Rob Rice poised a threat with his direct run which saw him force the Peacock custodian Damom Seville into an eventful stop as his tried manfully to stem the early dominance of the Peacock who saw attacking fullback Adam Trafford pave an opening for Clarke but the latter saw his well-educated left footer beat the diving keeper but sail narrowly wide.

Jimmy Greenhough, Donnelly and Ash Brooke were bossing the middle of the park for Peacock as they continued to ask questions of the Comrades rearguard but it was the tireless James Finlayson who turned the tide for his side against the run of play in the 22nd minute with a clever pass to Josh Corbett who scored with aplomb to give the Normanton-based outfit a tension reliving 1-0 lead.

Peacock continued to look the more threatening side with Clarke (twice), Brooke, Dennis and Donnelly testing the handling and the positional sense of Comrades keeper Lee Mulligan who proved to be very able and kept his sides slender lead intact in the face of sustained pressure.

Comrades fought back and finished much the stronger as halftime approached with James Finlayson instrumental seeing his effort cleared off the line before setting-up Rob Rice and Ryan James forcing the Peacock keeper Seville come to his sides rescue with superb stops.

Subtle changes and bold substitution by manager Dave Howden on the turn saw Comrades make a strong start with striker Ryan James twice head narrowly wide from excellent crosses from Richard Kingsbury and Josh Corbett respectively in as many minutes. The threat continued to be unabated with substitute Anthony Smith forcing keeper Seville into a parried save before Rob Rice went close following a flowing move between Finlayson and James.

Peacock's manager Mick Kelly introduced substitute striker Joe Clarke and he made an immediate impact forcing the Comrades keeper Mullighan into a double save after being put through by Ash Brooke. Brothers Nick and Joe Clarke began to cause problems for the Comrades rearguard as they lived dangerously.

However, it was another Comrades substitute who piled more misery to the Peacock. Twenty minutes from time, substitute Josh Oldroyd picked up a pass on the left and found the tireless James Finlayson who hit the roof of the net to give his side a breathing space with a 2-0 lead.

Peacock forced a late rally with the Clarke brothers of Nick and Joe, Dennis (twice) and Trafford foiled with goal scoring opportunities before a long punt from Comrades keeper Mulligan found Finlayson whose square pass across the face of the goal presented substitute Dave Woodlands with a simple tap-in goal to give his side a 3-0 lead.

Peacock retaliated and pulled a goal back with a thumping effort from Nick Clarke following an excellent Donnelly through ball but rued a glut of missed chances as Comrades marched on to secure a hat-trick of trophies adding the Supplementary Cup to the League Cup and the league title.